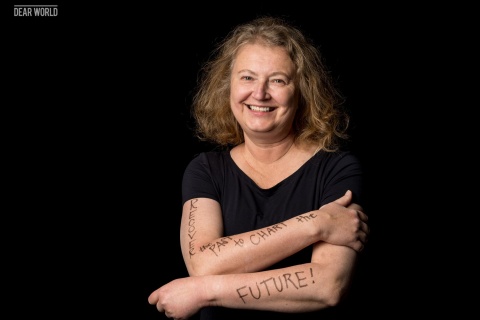 Lea VanderVelde is the Josephine R. Witte Professor of Law at the University of Iowa College of Law. She writes in the fields of employment law, property law, 19th century legal history, and constitutional law.

Her latest book is Redemption Songs: Suing for Freedom before Dred Scott (Oxford University Press 2014)  is based upon the discovery of almost 300 freedom suits brought by slaves in the St. Louis courts. Those files are now available on the web. An article describing her role in their discovery can be found in the Los Angeles Times, March 18, 2003‌. Additional data about the lawsuits, arranged by family and by entry in the day book, can be found here.

Redemption Songs follows her 2009 book, Mrs. Dred Scott: A Life on Slavery's Frontier (Oxford University Press 2009)  which is a full-scale biography of Harriet, the hidden protagonist in the infamous Supreme Court decision, Dred Scott v. Sandford. This work is a biography which many said couldn't be written and is one of the first of its kind to be published because Harriet was illiterate and left no letters in her own hand. Instead, the book meticulously reconstructs her life from hundreds of documents documenting the context in which she lived as well as the agendas of the masters she served.

Before the full-scale biography, Lea VanderVelde a law review article, with the same title, Mrs. Dred Scott. Mrs. Dred Scott (with Subramanian) is a feministic analytic demonstrating how the double subordination of marriage and enslavement masked the pivotal role that Harriet played in bringing and sustaining the significant law suit.

Recently her legal research has used digital technology and big data, much of which was collected as background material in the process of writing her books. For the last two years, she has been the principal investigator for The Law of the Antebellum Frontier project at the Stanford Spatial History Lab. This project seeks to digitally analyze the legal and economic mechanisms at work on the American frontier territories in the early 1800s by big data and text mining methods. She is currently using topic mining techniques to assess the Territorial Papers of the United States. Understanding these mechanisms of settler colonialism by focusing on how settlers were tied to the national center contributes to the understanding of American identity as well as current research on how empires expand. The American expansion into Ohio and Mississippi river basins during the Antebellum period is also relevant to Constitutional history because the Reconstruction amendments after the Civil War drew new populations and new states into the amending process. The overarching project also uses the techniques -- GIS mapping, geolocation, social network modeling -- to examine the vast amount of very old texts and documents about the antebellum frontier. More about the project can be found here.

Lea VanderVelde has authored more than 20 other works. Her legal scholarship can be found here.

Several of her works focus on gender to demonstrate how women's legal history resulting in more probative understandings of established areas of law. Her works on contract doctrine, The Gendered Origin of the Lumley Doctrine and intentional tort and rape, The Legal Ways of Seduction, are thought to be path-breaking and comprehensive. Her work frequently looks deeply into a famous case or series of cases which concern subordinated persons in their working lives. A Singular Conscience: In Re Summers drew on interviews of Clyde Summers before he died about the events surrounding a United States Supreme Court decision in 1946 that upheld the denial of his admission to practice law in Illinois because he had taken conscientious objector status. Many of her works concern subordination, emancipation, the abolition of slavery by the 13th Amendment of the Constitution and similar legal changes in the status of working people.

She has also co-authored major texts on property law and employment law.